Well that’s what I call rain

I’m nights again, so I cycled in to work yesterday evening, and went along the canal towpath, which I can follow for perhaps a quarter of the trip. It also avoids my “bete noir” of a hill, as I was feeling rather lazy. The towpath is slower, because it’s not in very good condition, but one rarely sees anyone else along its course. I have toyed with the idea of using it to avoid the scary and getting scarier drivers I have to put up with on my normal route.

A taxi driver nearly put an end to me, by coming so close to me, in a spot that only an idiot would try to pass. Step forward driver of licensed hackney cab 177, registered in Neath Port Talbot. I had my usual bout of tourrettes, and set off in hot pursuit, leaving bewidered pedestrians with expletives ringing in their ears, for no fault of their own. The chase was short lived, with the driver looking at me quizzically via his rear view mirror, he made it through the lights, but I had to stop. blast! X%&@:>…!!!

I’m going to compose a letter to the local council to name and shame.

Then on the way home, I felt the shiver of fate run up my backbone. I was in two way traffic, which was very light, when, yet another idiot decided to overtake a car coming towards me. This is a 30 mph zone, he came over to my side of the road, straight at me, I don’t know if he could see me, even though my lights were on. Come to think of it he must have been on drugs or something, I managed to jump clear, and turned to watch him, speed off at 50mph plus. No hot pursuit there then! Unusually for me, my tourettes stayed silent, it really put the wind up me.

The commute home was through a continuous downpour, I was soaked through very early on, but I stayed warm, in a long sleeved cycling jersey, under my “waterproof?” jacket. I had a woolly hat on, which is phenominal at keeping my bonce dry. Quite frankly, I felt great and could have cycled for miles, perhaps it was the near death experience earlier, that made me enjoy it so much. Even the hills were no problem, despite the headwind, which was far from the worst I’ve had to contend with, but not insubstancial.

Her indoors took some pictures of the river, later in the day, we’ve never seen it so high.

I had to take the car in for the nightshift because the road I use was flooded, and of course by this morning, it’s now the 2nd October, it had all cleared up, doah!!

Any way here’s a couple of pics. 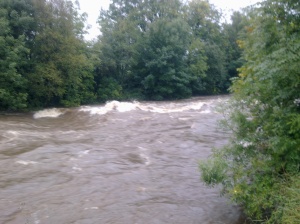 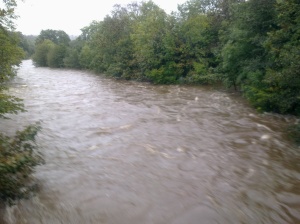 Yet another level of wetness…… »
« Cycling in the rain.

One thought on “Well that’s what I call rain”