Been a fantastic day all round. It’s not over yet, either.

Got up early, for me of late, 07.30. I was out on the bike by 08.00 for a spin, to check out my new chain and rear cassette. I decided not to load my pannier bags on, my lights, nor the replacement Bikehut computer Halfords gave me,(mine was showing my maximum speed as 52.6 mph., I ask you?), yesterday. So I was travelling much lighter than usual. In order to compensate for this lack of weight, I thought I’d stay in my hardest/highest gear, of the 21 I have available, even on the hills.

I cycled down the valley, through the village and onto the old road, which meanders along the side of the Neath valley, through Rheolau, Resolven, Abergarwed, Ynysarwed and Aberdulais. When I started out I had the distinct impression I was in for a soaking, it was damp but quite warm, I was wearing a cycling long sleeved jersey and  bobble hat. I soon discarded the bobble hat, because the sun had quickly burnt off the clouds over the valley, and I was cycling under clear blue skies. Despite a brisk breeze blowing down the valley at my back it was very warm.

Perhaps the breeze at my back was the key, or the other factors, the Subway being much lighter without panniers and other kit on board, plus, dare I say it, me being a little lighter in the saddle, but the ride was quick down to Aberdulais, and I didn’t feel like I was pushing it. I made it up the inclines with no problem, even though I stayed in the one gear, not that I have long slopes to contend with.

I turned back for home at Aberdulais, I’d promised her indoors I wouldn’t be too long. On the way I stopped a few times to take some photos with my mobile. Passed a couple of mobile burger bars, that I normally pass, always taken no notice in the past, but the smell of frying onions etc., was incredible, my hunger was returning. 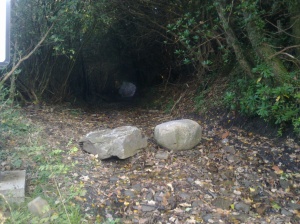 Cycling back up the valley now, I could feel the force of the breeze, but I stuck to the one gear and felt good. Back in Glynneath I picked up some catfood for Tipsy. Should have gone home at this point, but I decided to cycle up to Pontneddfechan, because the weather was so great and I just wanted to cycle some more. Passed yet another burger/breakfast bar in the Angel pub’s car park, where I heard three american girls talking, I immediately thought of the girls from Let’s Go Ride A Bike, but no it wasn’t them, no such luck for this welshcyclist, but I digress.

Saw a kingfisher sitting on a branch under the bridge at Pontneddfechan, he was off before I could get the mobile phone camera out, they’re gone in such a flash, but what an amazing flash of blue, glorious.

From there I pedalled on up the valley to the Ddinas rock, then up the forestry track alongside the Mellte river. Here I was passed by three men running with light packs on their backs, presumably army types, one looked like a Ghurka. They were going down valley and seemed surprised to see me. I said good morning as they passed, two replied likewise, while the chap I thought was a Ghurka, said a greeting in a foreign language.

When I reached the weir, near the old gunpowder works, I had to turn back, because bikes aren’t allowed into the forestry proper, due to damage to the trails. Whilest stopped at the barrier, I looked down at the river and saw a goosander fishing above the weir, then noticed a second. I was a long way away but I took some shots through the trees anyway, and then walked upstream to a footbridge to see if I could get a better shot. Still too far away, so I thought I’d go downstream and get closer to the river, as I passed the two fishing ducks they noticed me and were off flying up river.

I tell you there are two goosanders there.

It must be a very hard job being a wildlife cameraman! 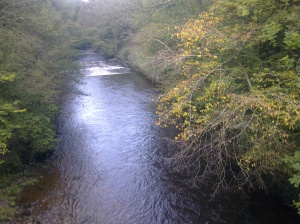 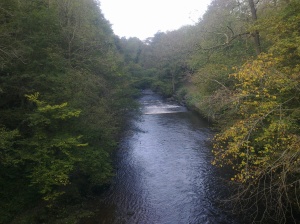 I tell you they're there!

Frustrated at my hopeless attempts at filming wildlife I took a picture of a static Subway.

Well, it was now time to get back home, so I set off back down the valley towards Glynneath, at the second bridge by Ddinas Rock I heard laughing and joking coming up from the river. I stopped and looked over the bridge to see the three men I’d seen earlier skinny dipping in the river. I had plenty of time to take a picture but I didn’t bother, and funnily enough they didn’t notice this widlife cameraman, obviously I was downwind again.