A very long day yesterday. Up at 04.15 . to get ready for 05.10, for Conor to give us a lift to Swansea(on his way to work), to catch a National Express coach to London. Her indoors and myself were dropped by the coach at Earls Court, Kensington about half a mile from the Bike Show menu, sorry venue, ( I’m hungry!) at 10.20. By this time we were ravenous, so we first popped into a Costa Coffee for a bacon roll and tea, before walking along Warwick Road to the exhibition hall.

It was a massive event, we spent the next 5 hours meandering through the stands, some very large, some very small, but all very interesting. We saw alot of great great bikes and gear plus heard about some really interesting ideas. The only part I didn’t like about the show was too many people, it was  a crush to stop,see and actually talk to the exhibitors. Nobody has patience anymore, anyway it wasn’t relaxed enough for me, but overall I’m glad I went.

However, coach travel is definitely not for me. I suppose I’ve been spoilt, all these years, with access to my car. Going up wasn’t too bad, because at least I could look out the window while the sun was rising. I was rewarded by spotting two munkjak deer, two red kites, a buzzard, a cock pheasant, a jay and a fox, which isn’t bad from a coach doing 70 mph along the M4. Wildlife spotting helped the time go quickly.

Coming back was the complete reverse, I suppose the “….Oh they’re tired…”, as they say in the ad, syndrome mightn’t have helped, but it was soul destroying. Four and a half hours stuck in that seat, unable to see anything of interest. Never again! I’ve told her indoors to give me a slap, if ever I mention coach travel again. Sorry I shouldn’t say never, ever, we don’t know what needs must in the future, I might indeed be grateful for the ride.

But getting back to the Bike Show. I have to say alot of it went over my head, I could see loads of roadies, diligently and seriously talking about the attributes of this over that etc., all a bit too deep for me. I just liked the look of the bikes, and I think I’ll be looking to get a singlespeed next, they are beautiful, with my last experience of sticking to the one gear, I think it will suit my goals nicely.

Anyway here are some shots. 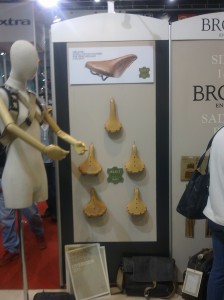 Brookes very close to my heart...er.

Her indoors caught me admiring this beauty.

Talking dirty on the Globe stand.

Yes I'm the dopey looking one!

What more do you need, ice cream and a bike.

On top of everything else I’ve got a bagload of catalogues etc., that will take a month of Sundays to go through, as well as some interesting web sites. I was very impressed with www.dreamslide.com , had a chat with the frenchman about his design. Currently, he’s only built a commuter model, which looks like a kids’ scooter, but he says the principle will work for larger wheels, and the idea of a ski-ing workout on pedals while you commute sounds ideal, but without the snow obviously. I did take a picture, but must have deleted it inadvertantly, have a look at the web site.

I wanted to get to talk to someone about how to go about choosing a singlespeed bike for myself, whether freewheel or fixed, or to get a flipflop hub, what fixed gear to pick and why etc., etc., but things were just getting too crowded.

I’m pleased to say her indoors reports that she had a great time as well, and was very interested in the adult trikes and the electric bikes on show. I was disappointed that no trailers for adults were on show.

Fabulous looking but not my cup of tea.

Would have loved to stay, but.....perhaps next year.

So it’s official “I’m now a bike anorak, and I’ve come out of the closet”.

On an entirely different note, but very exciting for me. While I’ve been sweating over this keyboard I’ve been listening to the call of a barn owl outside somewhere. Earlier in the year my son, Conor and I spotted one in the trees on the edge of a field at the end of our street, and could hear something calling at night. I checked out the call on the RSPB site and identified it as a barn owl, by the way that website is very impressive. Builders moved in on the field and we haven’t heard or seen it since, till now. Great stuff.

One thought on “The Bike Show.”