Monday and Tuesday saw me commute to and from my nightshifts. Freezing temperatures had lifted, but rain had moved in to take over, slow consistent drizzle, of the soaking kind. First commute in a long time, Monday’s ride in was fantastic, I felt so good, in mind and body, just thankful to be on my Subway at last. Work goes so much better after my commute, I believe I’ve said the same several times before in this blog of mine, readership one, that’s on a good day! The drizzle took it’s toll however, my kit was soaked through, but that’s not a problem for me, these days. I learnt a good while ago, how to dry it all, before the return trip home. Twelve hours is a long time, more than adequate for the purpose.

Morning came, and I had a great cycle back home, soaked again, but cycling in the rain is a pleasure also. Unfortunately, I was unable to sleep very well Tuesday daytime. When I’m on nights I usually get to bed by 07.45., get up again at roughly 11.30 then have another nap between 13.30 and 15.00, before heading back to work at about 16.00.. This didn’t happen, for a number of reasons, that are plaguing me at the moment. Consequently, I set off for work at 16.00 badly rested, and tired. Not that I felt it so much, but I knew I’d have to take it easy, and travel at a slower pace, even slower than my normal snail’s gallop.

With that in mind I decided to take the canal towpath from Ynysarwed into Neath, thus avoiding my bete noir of a hill at Aberdulais. Did I say, I was to take it easier, WRONG! We’ve had alot of rain lately, the towpath can hardly be described as paved, especially down the valley to Neath. Dips had been turned into puddles, which in turn had been churned into mud, by those pesky mountain bike riders, and even worse, motorbike scramblers using the towpath illegally. The resulting patches of glopping mud were too much for my continental touring tyres, which made progress hard work indeed. I had to pedal harder than I expected, and by the time I got to work, was well and truely knackered, with still my 12 hour nightshift ahead of me.

The night went much slower than usual, by the time my relief came in at 05.30, Wednesday morning, I was feeling really jaded. Still, once I began to pedal my spirits lifted, enjoying the light drizzle on my face, which had a refreshing effect on both my mood and, as I thought, my tiredness. Sadly, even though I wear shorts, my legs didn’t seem to get that refreshed feeling, because, the up slopes, gentle at this stage, were much more strenuous than usual. I began to dread the hill at Aberdulais, which was getting ever closer.

In the meantime, another minor distraction delayed me. My front light suddenly went out, at the same time as something dropped to the ground, in the middle of Neath. I immediately realised it was my battery and case, which should be secured to my top tube, by a velcro strap, on the Subway. At over two years old, and constantly punished by British weather, the velcro gave up some time ago. Since then, the battery and it’s case have resided in an Asda plastic bag wrapped around the handlebars. The Asda bag, obviously bio degradeable, had succombed with the help of that same good old British weather, allowing the battery et al, to drop through a well developed hole. 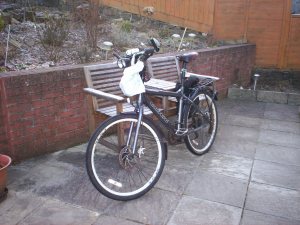 Retrieving a Spar long life plastic bag, also bio degradeable, from my pannier, I reattached the battery, secured it to the handlebars once more, and was able to get on my way.

Pedalling on, toward Aberdulais and the “hill”, I believe I had given in to it, long before I started to ascend, it’s called, “making mountains out of molehills.” By the way, by most of your standards this really is a molehill, which I’ve come to enjoy riding. It’s always been an effort, but then at eighteen and a half stone fully laden, the Subway with me. That Subway needs to lose some weight. Our combined weight is not a great mix with inclines. But still it got closer, I could see myself now, walking the Subway up it.

Just prior to the hill in question there’s a gentle downward slope, that I use to gather a bit of speed to attack the hill. Attack maybe a bit strong, more of a nudge, in my case. Still, it seems to have worked because I made it up the first of the two separate inclines, which make up this molehill. At this halfway point, I dismount, because it’s a busy stretch of  A road, to cross over, in order to cycle on the pavement, that’s sidewalk, for our American cousins. What’s more, despite it being a 30 mph zone, those reliable car drivers, racing to work after leaving 5 minutes late, would feel foolish travelling at such a sensible speed, anyway “it could never happen to them,”

Where was I ? Yes, halfway up, or as “ole King Cole says neither up nor down..”

So the strategy was to ride the pavement to the top. As my reader will be well aware, I’ve been singlespeeding i.e., ignoring 20 other gears on my Subway for a good few months now. I haven’t dropped down a gear once, since. But Wednesday I had to, mounting my bike I was struggling to make any headway, my legs were that tired, so yes, I dropped gear and got a bit of momentum. Only to find refuse bins strewn higgledy piggledy across the pavement. It was refuse collection day! I’ve cycled up this hill many times when it’s been collection day, but normally the bins are lined up tidily to one side of the path, leaving me plenty of room to ride by. Oh so different that morning, it was like an obstacle course, I couldn’t keep any momentum, as I wobbled between the bins. Coming to a standstill, I was forced to dismount and walk the Subway the rest of the hill.

More than a bit weary now, I still had approximately 9 miles to go.

The rest of the trek home was very hard work, and testing, but I eventually arrived. Normally the trip home takes me a maximum of one and a half hours, Wednesday it took one hour 45 minutes. What’s more, Iwas cream crackered.

Would I change the experience? That’s a no. These trials and trails, (nice play on words there, don’t you think?) keep the commute from being boring, but much more importantly, become a priviledged experience. Why? Because, there are so many out there who can’t ride, for all sorts of reasons, a bike like me. I’ve alot to be grateful for.

The Ramblings of a Paddock

Unruly thoughts and explorations of a man named Paddock

All Seasons Cyclist
Chronicles of a Travel Addict