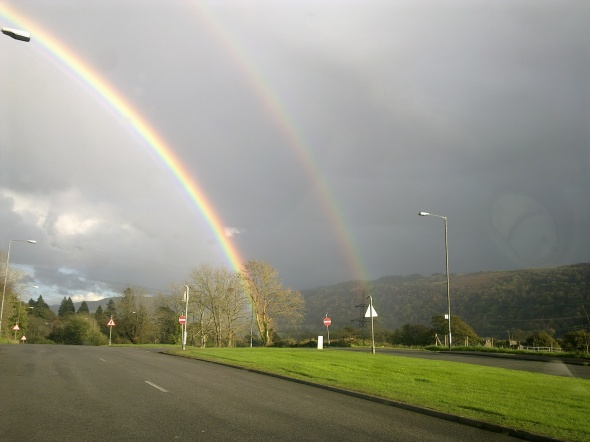 That puts the 'Crock of Gold' somewhere in a field somewhere further up the valley......?

It’s now late Sunday afternoon, and I’m trying to remember anything of note to write up in this blog of mine. As they say, start at the beginning….

I went out on the Pioneer GT at 08.00 this morning, meant to leave alot earlier, but couldn’t get myself out of bed! I am getting so lazy, when I’m not working. Could have been due her indoors and myself going out for a meal last night, just two courses of pate and toast,followed by a beef dinner for herself and a turkey one for me. It was lovely, and we enjoyed. We were home by 20.30., but then stayed up late watching various programmes that had been saved on the recorder.

Tipsy, our weird cat, got us up at 03.00., because he wanted something to eat and then go out on the tiles, just as youngest son came in after a night on the tiles, this place is like a weekend hotel.

But anyway, getting back to this morning. I left in drizzle, which soon abated, the skies turned into broken cloud before becoming blue with glorious sunshine, with quite strong gusts of wind. The sun was so bright I wished I’d brought Bloc sunglasses with me. I did the usual ride through the village, up and around Cwmgwrach twice then down the B4242, valleyside, as far as Abergarwed. Usually, I’d go on, at least, as far as Ynysarwed or Aberdulais, but turned back because I was concerned for my safety.

Why? I hear my faithful reader ask.

The A465 dual carriageway that snakes down the Neath valley was closed to Neathbound traffic, between Resolven and Aberdulais, and was diverted via the B4242. The truth is that the diverted cars( sorry drivers) obviously felt that because they had been directed from a 70mph dual carriageway, there was no need to slow down. Add to that their total diregard for other road users, in this case me on my bike, and I had real fear of me returning home in one piece. The straw that broke this camel’s back was a ford estate that passed so close to me, I really thought I’d be on the ground. That happened as I entered Abergarwed village, where the traffic has to coverge into a single lane between parked cars on either side of the road. Even though the automatic “Slow Down 30mph” sign was flashing widly, this so and so decided he had to get into that single lane before me, racing at, at least 45-50mph to do so, and cutting in dangerously close in front of me. I felt the wind drag/draught on my right calf, he was only inches away, and I had to swerve to my left.

I soon was shouting expletives and gesticulating madly in his wake, I don’t know if he/she even noticed! The car behind me did and I heard him braking fast as he knew he wouldn’t be able to make the same manouevre, because I was now passing the first parked car. The village itself, is at best, a 300 metres long ribbon of houses either side of the road, before the road then widens into a much faster section. At which point all the traffic in my wake began accelerating past me and then eachother, nothing, but nothing being allowed to slow their progress, in getting to their, Sunday lunch or visiting granny, destinations. Why do people, ordinary types, like me and my faithful reader, become such driving maniacs. To some extent I can understand boy racers, they’re inexperienced and thick, like we all were at their age. Fortunately I, for one, didn’t have a car, or any other kind of leathal weapon, back then. But these were grown men with their families in the cars with them. Beats me!

Where were the police? Certainly not policing the B4242, or can they police for speeding these days? I don’t know. I suppose I’ll find out one day if I do 35 in a 30mph section of road somewhere. Why is it, or at least it seems that way, that those who rarely or if ever transgress are the ones who get caught, get fined and penalised? Is it because the boyracers, and real maniacs don’t pay their fines, so what’s the point of bringing them to court? Perhaps I’m now going far to way off on another course now so I’ll stop this rant.

Once more, back to my cycle ride.

I turned around Neath side of Abergarwed, but still had to put up with the maniacs coming down the valley against me till I got to the relative safety of the Glynneath side of Resolven, welcoming the much more quieter, occasional sighting of a car. The truth is I should have known better, because, I’d had a narrow escape the day before (Saturday) while on my commute home, after a nightshift. What made it far worse was that it was still very dark at 06.30. I knew that the traffic had been diverted down the B4242, having seen the diversion signs on the Friday, but it was coming down the valley against me.

But of course these selfish drivers forget to dim their full beam. By the way I was very pleased with the beam from my new Steradian lamp, however, it was no match for these full car headlight beams. Constantly I was almost blinded and dazzled, as these oncoming cars rounded corners toward me. It was hard going, often I was scared that I was going to run into the kerbside, or off the road, under the glare. I didn’t dare shift toward the centre of the road, as all the cars seemed to be racing.

I knew once I got to Resolven I’d leave this nightmare behind me. But, I still had to get there. Just after Ynysarwed, after a S bend, where perhaps a dozen houses are lined up on the south side of the road, it drops down to a fast stretch to Abergarwed. The road is wider, but far from straight.

Well I came down the incline, and could see a line of cars coming towards me. I felt what was about to happen, almost psychically, perhaps a premonition?

I just knew if a car came out of that line to overtake, it would not be good for me. Intuitively, I slowed down, watching sharply ahead. And yes, here it came, on my side of the road two headlights were racing towards me. I braked to a stop, the lorry that was being passed, braked and the car cut across in front of me to the correct side of the road, with a toot, toot as if in apology for almost killing me. If I’d had a leathal weapon to hand, a bazooka or some such, I’d have turned and taken that car out with absolutely no regret.

That experience should have told me to turn back this morning as soon as I saw how much traffic was using the B4242.

But hey, I’m here, and able to whinge about it. Which is a good thing, eh Clive? That’s if you’re still visiting my blog these days?