Pedalling for pleasure, not to work, but to play…….

No, that’s not a UFO! It’s the sun breaking through the dank mist I’d been pedalling through since 07.30 this morning. Temperature’s rising, as they say.

Checked the forecast last night on my notebook computer, it said the sun would be shining from 07.00 to 11.00, so I decided to go for it. When I set out from home, it was chilly, damp and very misty, but I was eager for a spin, not to work, but, to play. Preparation for the ride was simple, didn’t need to carry much, just a few tools, pump and puncture repair kit. My Pioneer is still missing a left hand crank, so it had to be my Jamis Sputnik single speed, that I’d be riding. Sadly, the Sputnik hasn’t a rack fitted, so all my kit had to go in a plastic carrier bag, twisted and secured around the handlebars.

What do you think, my reader? I think she’s a picture!

She is great to ride, much faster than my Pioneer, because she’s so light, 22 pounds compared to the Pioneer’s almost double at 40 plus pounds loaded. Just a joy to pedal, and single speeding is supposed to be the purest form of cycling, according to afficionados, though I’m not fixed wheel yet (the purest of pure form, apparently), I’m looking forward to flipping the rear wheel to have a go, and soon I hope. Just don’t want an audience when I give it a try. First attempt on a fixed wheel, was in Evans Cycles shop in Cardiff, weird!! Standing on the pedals, I couldn’t get over the fact my whole body rose when I stopped pedalling, as the pedals continued moving forward and upward. It must be great to control a bike with a fixed wheel??

But that’s for the future, and I digress from this morning’s playtime.

I went down the valley to Aberdulais, 10 miles or so, pushing harder than usual, the aforementioned hill was hard, but, it didn’t phase me too much after commuting on the Sputnik, these last few times, then I turned back up the valley. By now the sun had cleared virtually all that mist, and it was really bright and warm. I regretted picking up my sunglasses, earlier in my shed, then putting them back on the shelf, thinking to myself, I won’t be needing them today. Where’s my “just in case” head?

Cycling back up the valley, I didn’t stop to take my usual shot of the Ynysarwed (Arwed meadow) waterfall, but pushed on to the next little group of houses, on the B4242, Abergarwed (mouth of the Arwed). Here I stopped, as the sun was lighting up a little dell, which I thought deserved a photo taken of it.

I stopped for a few minutes listening to the birds, and slowly they became visible flitting from branch to branch above me, among the trees on the hillside. There were plenty of great tits there, but I was thrilled to see a pair of coal tits, I tried to catch them with my phone camera, but to no avail, unless of course, you my reader, can spot them in the next picture. I just pointed the camera and hoped for the best. Where’s my David Bailey head, when I need it? 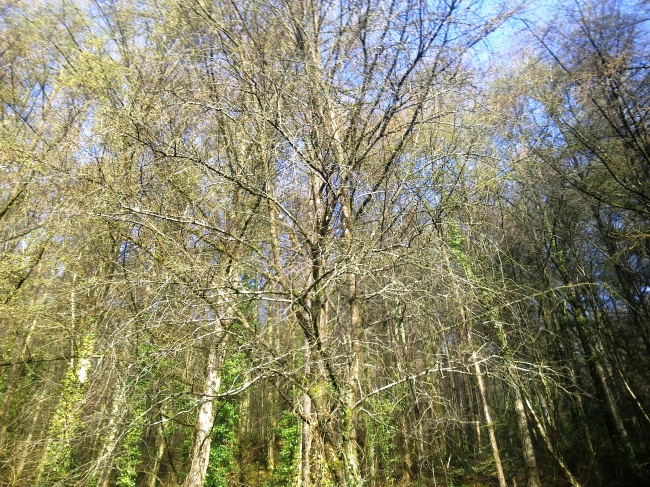 By now, the temperature had risen considerably, almost summerlike, and I was pedalling at a very leisurely pace, having a good look at all around me. Over the last few weeks a lot has been happening at the very scenic Rheola pond. A holiday village is to be built there, the old bike factory ruins were knocked down last year, and the contractor’s prefabricated buildings are now in place. That done, it appears the next job is to landscape the surrounds of the pond. I find this very sad. 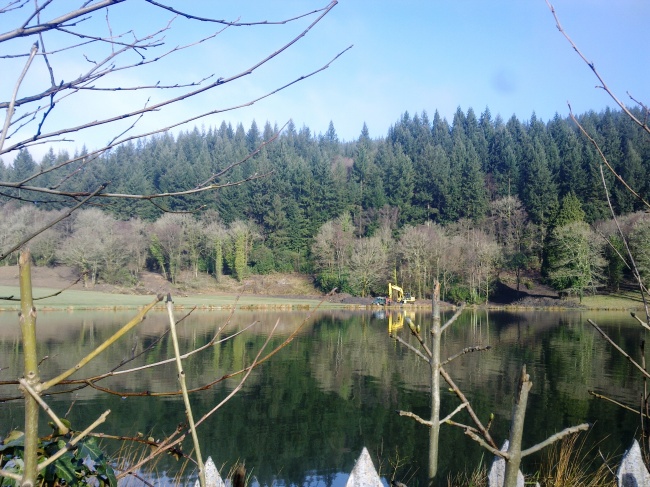 This shot above shows the slope cleared of most everything, the trees that were there a week ago, was the site of a long established heronry, now gone forever. Where will the herons go to nest this year? Foxes, badgers, rabbits, otters even, for I have seen them in these parts, disturbed and needing to find new areas to forage, where such space is getting very difficult to find. All I hope is, that, this holiday village will provide much needed jobs in the valley. Time will tell.

Much was going on in my mind, and I wanted to take a closer look. I remembered, back in the day when I delivered milk around this area (after one of my redundancies, must be 20 years ago now), I used to deliver to the house above the pond, via a driveway/access road further up the B4242, beyond the pond. So, off I pedalled, turned up the track, which thankfully, wasn’t as steep, as I thought I remembered it. Back then I drove an old battered transit van to deliver the milk bottles, with my young assistant Lee. Happy days. Before getting to the house driveway gate, there is a flat expanse to the left overlooking the pond. Many a time, Lee and I would stop for ten, drink a pint of milk and eat a mars bar, looking at the pond.

Looks like the path will go right around the pond.

These big trees formed the major part of the heronry, they’ve been trimmed, and the surrounding copse thinned to be of no use to nesting herons, such a shame.

I cycled back down the track, taking great care not to slip on the various wet and slippery stones, my Spunik’s 23c tyres were not made for off road, this double track anyway. Back on the road I made my way homeward, and soon was cycling alongside the Neath canal, which is nestled, here, below a steep wooded bank. With all the rain we’ve had this winter, it was no surprise that a landslip had occurred here near the “new” Cwmgwrach mine, reopened after Maggie had closed it. Sadly, now in danger of closing again because of the glut of American coal on the market. It’s no surprise that it’s now owned by an American coal producer, there’s loads of top grade coal there, must be saving it for a rainy day………politics, I think. Sorry, once again I’ve been sidetracked.

The canal is just over the grey road barrier, between the bottom of the slip and the coal coloured material dredged out of the canal. 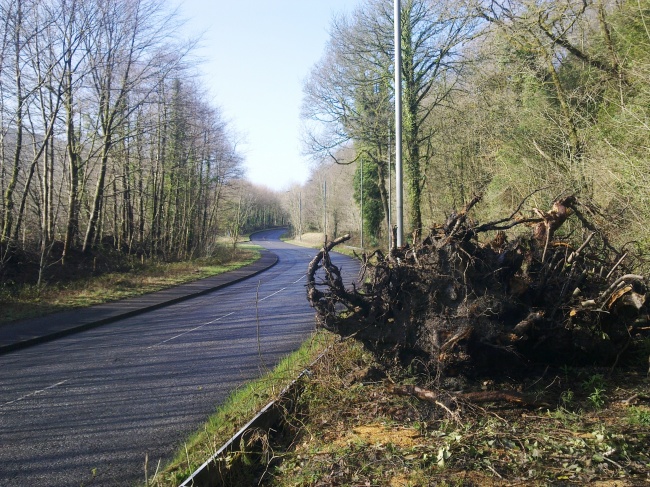 All that’s left of the trees that slipped into the canal are the roots now lifted out. 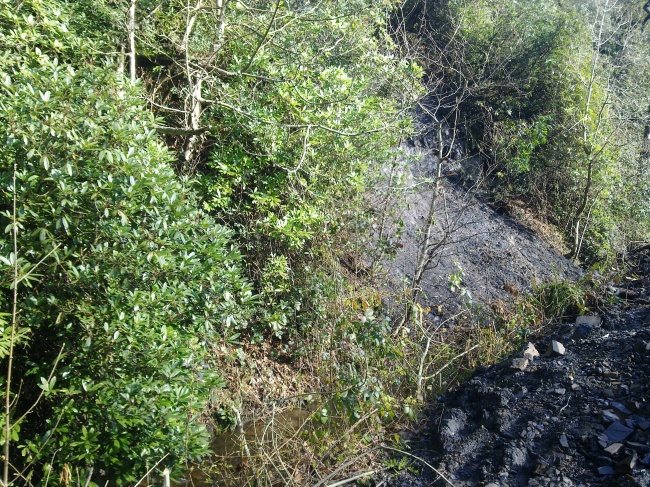 Now, I was just over a mile from home, and I cycled on through the village, up to Pontwalby and home. It was 09.20, so just a little short of two hours play.

Life’s great isn’t it? Can’t get those herons out of my mind, though.

One thought on “Pedalling for pleasure, not to work, but to play…….”