Cleaning day for the old Pioneer

My poor old Pioneer doesn’t get cleaned often, but with the sun out and my other chores done, I thought she deserved a thorough going over.

I must admit I find it hard work getting into the awkward spots, and I’m not endowed with a lot of patience, but I’ve got most of the gear to give it a real go. 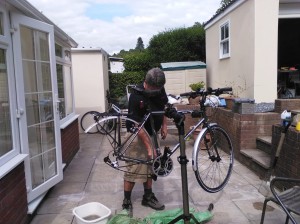 I mounted her on my workstand, then removed the front and back wheels, and gave the frame a spray of muck off, then set about the cassette, rims and spokes on the wheels. Using old toothbrushes, rags etc., I got good and dirty, but by the time I’d finished my old Pioneer looked much happier, if not brand new.

Just over ten years I’ve been riding the Pioneer now, I was very lucky when she came to me. I’ve probably told the story before, back in the early days of my blogging, but you’ve guessed it, I’m going to tell it again.

Over 10 years ago, after playing a game of five a side with my work colleagues, I had a very disturbing revelation, not only was I playing for the “Fat Baps”, I was, in fact an extremely “Fat Bap”. During the game I was knocked to the ground, and struggled to get back up again. I couldn’t understand it.

I had put on weight over the years, from 14 and a half stone, I’d gone to 17 and a half, and was morbidly obese. It’s very strange but I didn’t see this happening to me. I’d given up smoking my pipe a couple of years before, that plus a very non active life style, my love of food, meant the pounds just piled on.

On top of that I discovered my blood pressure was high, and I was put on medication.

What was I to do?

Obviously, I had to change my life style, and start exercising. Fortunately, my employers signed up for the “Ride to Work” scheme, so I resolved to start riding a bike. As it happens I missed the deadline to get a tax free bike, but went ahead anyway, purchasing a Raleigh Countryman 3-speed bike.

So my journey to commuting a round trip of 40 miles a day began. The first time I rode the “Countryman”, it was extremely hard work, I barely made 3 miles around the village. Despite being embarassed about being seen as an extremely fat man on a bike, I persisted, and so got better and better, in terms of stamina and distance. I was feeling alot healthier, but then disaster struck. While pedalling on the main road midst lorries, buses etc., the left pedal arm snapped, and I was sent flying on to the road. Luckily, I only ended up with cuts and bruises.

When I got home, I thought to myself, that shouldn’t have happened, a pedal snapping in that way. I complained direct to Raleigh, writing to the chief executive himself, explaining what had happened, pointing out this could be a very serious problem in the production process of their pedal arms, and result in serious consequences for riders of their products.

To cut a long story short, after the exchange of a couple of letters the chief executive sent me Raleigh’s latest catalogue telling me to pick anything I wanted from it. There were bike galore ranging from my humble ” Country man” at £125, all the way up to £2000 plus. I picked the Pioneer Venture 27-speed touring bike, that I still ride today. The quoted price, back then, was £799, way out of my league.

What a lucky guy was I?

It wasn’t all plain sailing from then, as the Pioneer took some while for me to get used to. The narrowness of the tyres just put me off, stupid I know, but for me it was a problem, but after a year or so she became my commuter of choice, and basically, I ride her 90% of the time.

Hopefully, for many years to come.

Greece — The One Biggest Lie You Are Being Told By The Media »
« Where does the time go?

3 thoughts on “Cleaning day for the old Pioneer”