A little better, and back where I want to be…….

Well, my Pioneer was not perfect when I rode her for my commute to and from my night shift last Monday night. It was my first serious ride after her Silver service at Halfords. I soon noticed a problem with the gears slipping, when coming upon any incline, it was almost as if the bike was telling me to change down a gear. It was annoying, but I was able to cope, and managed to get to and from work OK, but I was not happy that this was the result after spending £82 for said service and parts.

It was not until, last Thursday, that I was able to take my Pioneer back to Halfords to get the problem sorted. The mechanic who had done the service was on hand, and at first suggested that this was normal, and would only need a few adjustments, when I asked him why this was not sorted out in the servicing of the bike. He continued to tie himself up in knots with suggestions that the hanger cogs were worn etc.. Then it was the chain, that was worn, “but the chain was replaced by you during the service…”, I replied. Eventually, he admitted he had not changed the chain, that he had done 5 services that day and had obviously got confused. I felt sorry for him, I know how Halfords treat their staff, while doing servicing their mechanics are expected to deal with customers, which means they leave the job that they are doing, then come back to it later, a sure means of forgetting to do this or that.

So basically, I let him and Halfords off with their failure to do a correct job. Said mechanic put a new chain on, adjusted the gears, I took the Pioneer for a real spin, up a couple of hills, the gears did not slip, and I was happy. He apologised profusely for getting things wrong, and I returned home.

Though, I was eager to get out on my bike for a real pedal, I did not manage to do so until yesterday morning, when I went off at 06.50 to ride down and back up this beautiful valley that I live in. Everywhere was dank, damp and miserable, in that beautiful way that it appears when one is actually out in the fresh air, pedalling

It was cold, and I wished I had put on my thicker gloves, because the ends of my fingers were tingling and numbing at the same time. But I was happy and soon gazing around at what was to be seen. As usual, I would catch a glimpse a flash of some interesting bird, which would disappear from view by the time I had come to a stop, to have a proper look. Frustratingly, I had remembered to turn on my Garmin watch to record the details of my ride, but continued to forget to turn it off every time I stopped, consequently, by the time I finally returned home, my average speed read 8 mph.

But, I digress, my pedal, actually went very well.

I found a new inhabitant at the canal basin Ynysarwed, what a fine looking fellow, you must agree. 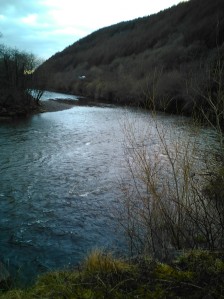 Though, he does, perhaps, look somewhat lonely. Could be waiting for his spouse to arrive?

The ride continued to be a great experience, but, sadly, I have no time to report any more.