It was a week last Saturday, when this tardy blogger, had a magical experience. I was merrily cycling home through Neath, after my 12 hour night shift, in what has become the norm for August weather hereabouts, i.e., a steady drizzle of the very damp stuff. No matter, I was riding my bike, and as I like to point out, “Rain ain’t Pain”, but I shouldn’t meander.

Nearing the bridge that crosses the Neath river, Afon Nedd in my mother tongue, I heard a great squabble, squeaking and whistles, which the nearer I got sounded like birds fighting and very loudly. In the past after following the source of such a rumpus I have turned the corner to discover kingfishers in an almighty conflagration. But this was the middle of urban Neath, I was about to turn right onto a busy road bridge, albeit there was very little traffic at 06.00 a.m..

Slowing down, this slow cyclist hadn’t the need to use brakes to achieve this, the rise of the arc of the bridge did the job perfectly. I came to a stop and peered over the bridge’s side fencing. Looking down at the south side muddy bank of the river, there were two otters having a real tussle, biting, squeaking, yelping, whistling, all the while rolling about in the ooze of mud that makes up the river bank. The tussle was over in a few seconds, one had obviously bit the other where it hurt. This caused the loser to turn and run up the bank into the bushes that nestle in the right angle between the road, I had travelled along, and the bridge crossing itself.

By now, I was struggling to get my mobile phone camera into operation, as the victor of the struggle ambled into the water below the bridge, twisting and turning, with a rather smug look on his face, while watching in the direction his opponent had fled in. By now I had phone camera ready for operation, but with my wet gloved fingers failed to operate the menu keys. While I continued to grimace trying to remove the cumbersome gloves, the victor drifted under the bridge.

The structure in question carries a dual carriageway across the Neath river, by now I had my phone set to camera, as I left bike one side while I hurried across the dual carriageway to try an glimpse and get a shot of the victor. Next, I was gazing down onto the river phone camera cocked for action, a minute then two slowly ticked by, no sign of the victorious combatant. So, I went back to my bike to look again from that vantage point, only to see the bow wave from the otter’s head as he swam up stream. Too far away to get a picture!

Extremely crestfallen, at missing such an opportunity, I continued to study the mud and the bank below, and took some pictures. On later examination, I could plainly see footprints the combatants had left in the mud, as well as what I, as an untrained naturalist, would call a run, used by the otters through the grass down to the mud of the river. How long had these otters been in possible residence, was there a holt under the bushes at the tops of the bank, from whence this run appears to start? 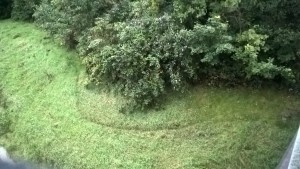 All I can say, I was extremely fortunate to have witnessed such a scene. Wild otters in the heart of Neath! Having had the good fortune to see otters on the Neath river before, a mother and her two kits, as well as several road kill, it is obvious that these two were youngsters, still possibly in residence, under the protection of their mum, as they start to explore and squabble in their new world. Long may it continue.

2 thoughts on “The Otter Day!”